Since the birth of Louise Brown in 1978, in vitro fertilization (IVF) has advanced tremendously and has proven to be a very successful treatment for infertile couples. However, there are some drawbacks to this mode of treatment which may deter many women from treatment.

In vitro maturation (IVM) was first introduced by doctors in Denmark in the late 1990s. It is a revolutionary treatment technique developed to help couples with infertility problems which could potentially lead to cheaper and safer treatment compared to the conventional in vitro fertilization (IVF). To date there are about 400 babies who have been born worldwide using IVM compared with around two million by IVF.

Infertility involves 1 in every 7 couples after 1 to 2 years of trying to conceive. It can be due to male or female factor or a combination of both. Treatment differs and can be as simple as timed coitus or a more technological demanding process like the IVF.

IVM does not involve stimulation of ovaries by daily drugs injections. Only minimal medications are required. Therefore the eggs within the ovarian follicles are not mature. The immature eggs are harvested in a similar way to the IVF technique, and kept in the laboratory’s Petri dish for 24 to 48 hours until they are mature. Following maturity, the eggs are then fertilized by micro injecting sperm directly into them by a process called ICSI or intra cytoplasm sperm injection. Hence the eggs maturation happens in the laboratory rather than the ovaries. This is the basis of IVM treatment. Two or three days after fertilisation, the developing embryos are transferred to the mother’s womb. The treatment is also expected to be shorter than IVF.

In IVF, the ovaries are stimulated with medications such as gonadotrophins to increase the number of mature eggs. As result of this, there is high cost involved as the drugs are very expensive. The women require daily injection with the medications and frequent monitoring which can be a nuisance. There are potential side effect from the medications which can cause abdominal bloating, breast tenderness and mood swing. There is possible link to ovarian cancer which has not been quantified and may deter many women from having treatment. 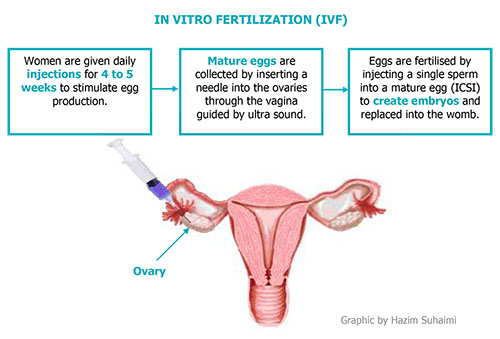 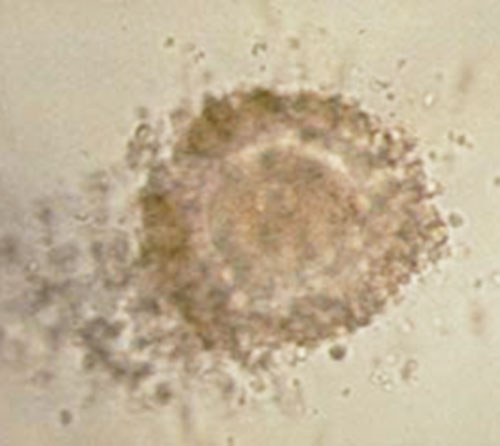 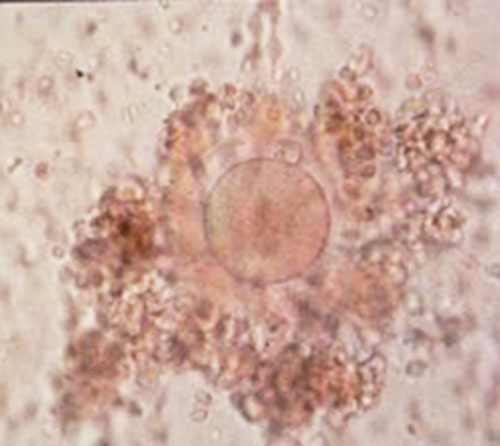 Mature egg after 36 hours of culture

In IVM all the risks associated with IVF are being minimised. It is presently a useful procedure for two groups of women: those who are fertile, with normal cycles, who don't need stimulating hormones to help them to become pregnant, but who are undergoing IVF because their partners have impaired sperm, and for women with polycystic ovarian syndrome (PCOS) who are at an increased risk of developing ovarian hyper stimulation syndrome (OHSS) during IVF hormone treatment.

In IVF, one of the main factors affecting the success rate is the age of the women. This is likely to be the case in IVM. Generally women who are less than 35 years tend to respond better. The other important factor is the number of immature eggs collected. The more number of eggs collected, the more embryos are produced, and therefore the greater the choice of embryo selection for transfer. About 70% of the immature eggs retrieved will be successfully matured in the laboratory. But only 60% of the mature eggs, following fertilisation will develop into embryos.

The major disadvantage in IVM is its success rate which is only between 20 to 25%. This figure is very low compared to IVF which can be as high as 45%. However IVM is at the infant stage. When IVF started in the 1980s the success rate then was only 14%. Another major shortcoming with IVM is that the cultured mature eggs have hardened egg shells. As result of this, insemination can only be done by micro injection of sperm into the egg or ICSI. Finally the culture media use to nurture the eggs to maturity need to be improved. It is hope that by improving the culture media, the percentage of mature eggs per cycle of treatment would improve.

IVM is a potentially cheaper, shorter and a safer option of treatment for infertility. However, its usefulness is presently limited to only a few groups of patients. More research is needed to support its use. It’s now up to the scientists to explore this revolution in fertility treatment.